Storage tank fires and explosions claim hundreds of deaths and cost billions of dollars every year. It is almost impossible to control an explosion or a fire inside a tank farm.

When a tank explodes or burns, the fire rages at a dramatic temperature of over 750 degrees. Almost all automatic fire extinguishing systems would melt and be deemed ineffective.

AS a result fires are allowed to totally burn  causing numerous catastrophic deaths and destruction.

We injected AXS Rolls with a special polyurethane foam that allows them to float on the fuel surface; While regular AXS Rolls are placed in a safety ring surrounding the tank.

The AXS Rolls act as a blanket covering the fuel and depriving the fire from oxygen. Fire temperature was reduced from 750 degrees to 350 degrees allowing the automatic
passive fire extinguishing system to work properly.

This AXS Solution WILL save the tank and the fuel.

This is a 12 meter diameter tank filled with 40,000 liters of diesel, It was built specifically to demonstrate the effectiveness of our AXS system to extinguish fires in refineries and tank farms. The floating AXS Rolls were placed on the surface of the diesel.

The fire was allowed to burn freely for 2 and ½ minutes before applying the foam.

The temperature of the fire was measured at 350 degrees only and the biodegradable foam extinguished the fire in 17 seconds.

According to the NFPA, there are over 5000 fires in the 168,000 US gas stations every year causing many injuries and deaths and costing over 20 million dollars in damages.

One cause of these fires is the buildup of gasoline vapor inside the Pump Chambers and increased levels of electrostatic ratios. These chambers are in need of constant maintenance due to water and rust damage.

The absence of passive safety systems permits any wrong move to cause fires or explosions.

Every underground tank must have a pump chamber.

The NFPA in the US and the ATEX directive in Europe have placed many rules and specified many standards to unify the safety codes in pump chambers at gas stations.

One easy and economical solution is filling the AXS cylinders in small easy to handle aluminum wire bags and placing them inside these chambers. As a result, the vapor is condensed eliminating the risk of fires or explosions.

These bags could be removed when maintenance is needed and placed back in the pump chamber when done. 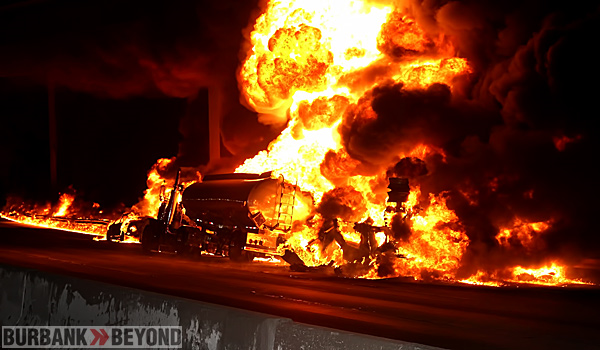 These explosions occur on the ground, in the air and at sea. 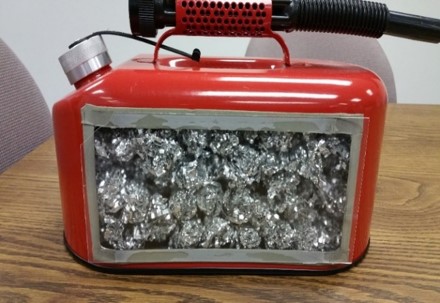 Placing AXS Cylinders inside these metal gas tanks eliminates the pressure and stops the propagation of heat inside these thanks.

We used gasoline tanks to illustrate how AXS Cylinders are used to prevent these explosions. The same principle applies to large tanks on the ground, in the air and at sea.

The AXS gasoline cans are totally safe and WILL NOT EXPLODE.

Industrial and emerging nations have been making the switch from coal and fuel to cleaner natural gas and propane.

Every year thousands of Propane bottles explode inside homes, apartments and businesses around the world causing deaths, injuries, destruction and financial loss. 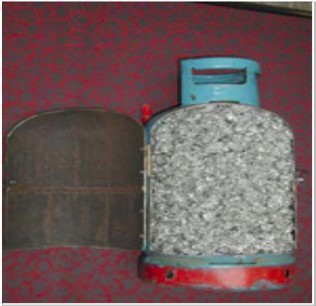 Placing AXS Cylinders inside these propane bottles eliminates the pressure and stops the propagation of heat inside these cylinders. 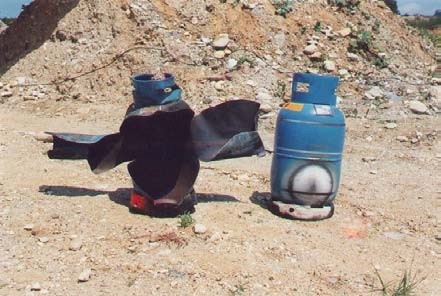 We tested and compared AXS propane bottles with regular propane bottles. The non-AXS regular bottles exploded violently and could have caused tremendous damage while the AXS bottle had a slit in its side that allowed the gas to escape with no explosion.

The AXS propane bottles are totally safe and WILL NOT EXPLODE.

Aviation accidents are very devastating because they cause large number of deaths and inflict high economical and emotional cost. These accidents affect large passenger and cargo commercial planes, small personal planes as well as military planes and helicopters 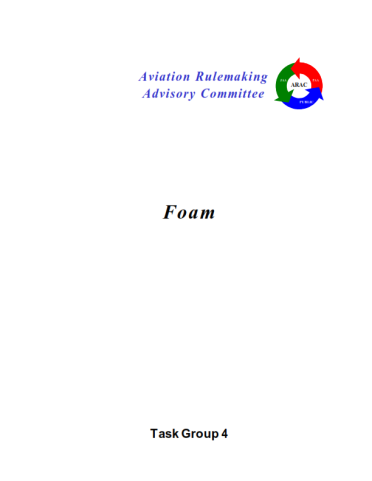 AXS is uniquely qualified to protect the planes fuselage from fires, bullets and the sloshing effect.
The FAA has issued a report that compares the cost and effectiveness of AXS products to the foam in the aviation industry.
FAA Aviation Rulemaking committee

AXS products has gone a THREE year long special testing program under the control of  a European Commission special project called AEROSAFE.
AEROSAFE displayed that AXS van be easily and safely installed in the fuselage and  concluded that AXS can indeed save planes from exploding.
Aerosafe Final Technical Report

Sloshing occurs when the fuel tank is partially filled. It is noisy and dangerous.

Sloshing can throw the vehicle, boat or plane off balance and result in dangerous accidents.

We conducted lab and field experiments by dividing a glass tank into two exact chambers, one empty and the other filled with AXS cylinders. We placed the tank on a moving table. After a short-term acceleration.

The AXS chamber that was completely filled with AXS Cylinders showed that AXS can reduce sloshing movement by 80%.

Most recent American and Canadian studies have concluded that each gasoline station can lose around 5,000 liters every year through the emission of gasoline vapor through the venting pipes into the atmosphere.

According to a HARC study, the oil and condensate storage tanks lose 300,000 tons of vapor per year in EAST TEXAS ALONE causing billions of dollars in economical loss and huge impact on the OZONE level and the environment.

AXS PIPES reduce the loss of vapor by approximately 60% and saves the gas station industry millions of dollars per year by simply replacing the customary venting pipes with AXS Pipes.

AXS PIPES are filled with AXS Cylinders. The AXS Cylinders remain cooler than the surrounding environment and they capture the escaping vapor by condensing it and returning it to the storage tank in liquid form while keeping safe pressurized tanks. 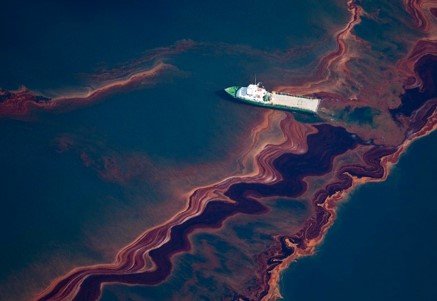 Recently, oil spills have become an increasingly persistent problem with frequent recurrence and an insurmountable economical and environmental costs. It takes years and even decades to recover the financial losses and restore animal and marine habitat to its original state.

Until now, most spills have been treated with very inept and ineffective booms that cannot withstand high tides and offer a real solution to contain large spills quickly and effectively. 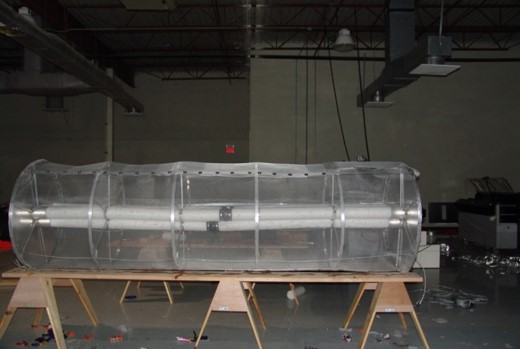 The AXS BOOM is an engineered floating structure that uses AXS rolls and Cylinders to trap the crude oil while allowing the water to pass through with no resistance.

The collected oil would form a floating oil lake on the surface of the oceans or rivers that would be skimmed and moved away to be recycled and used.

The AXS BOOM is an economical and highly effective way to protect any water way from an oil spill catastrophe.